Antiviral properties of tea: Black Tea may become the unique brew of choice with no side effects to fight against Corona virus?

Antiviral properties of tea: Black Tea may become the unique brew of choice with no side effects to fight against Corona virus? 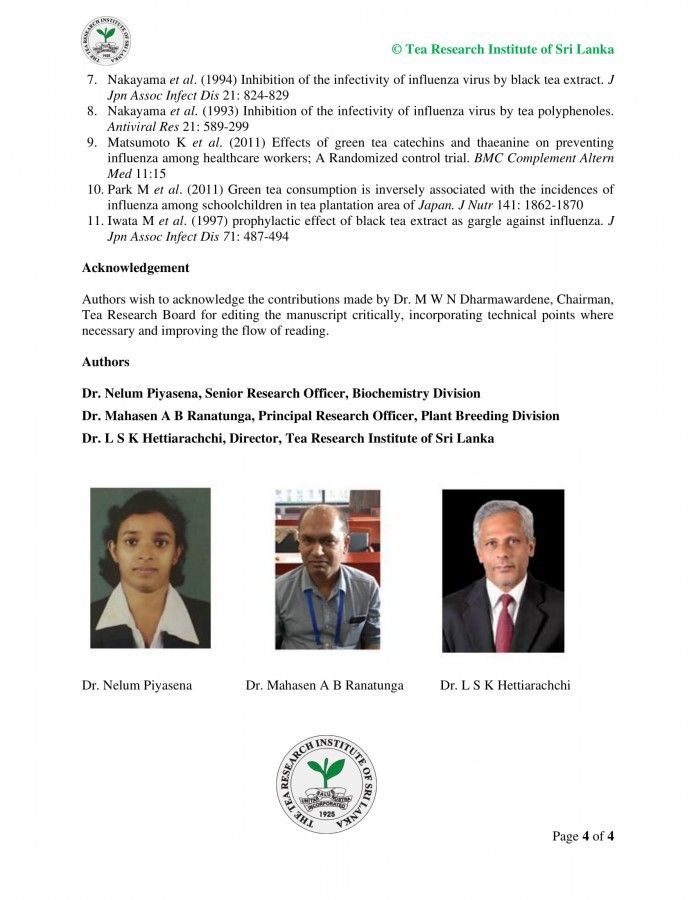 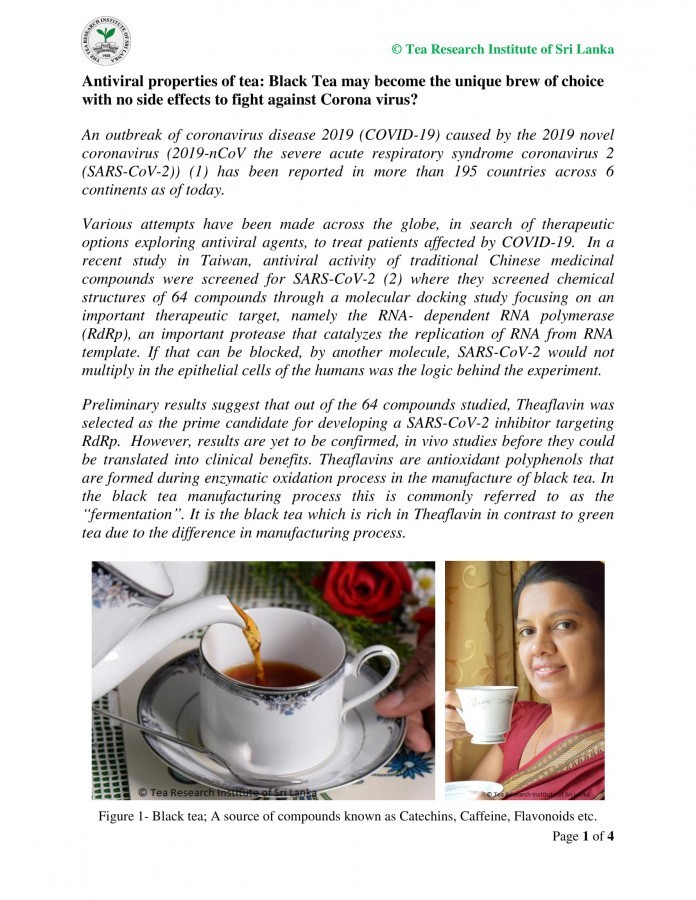 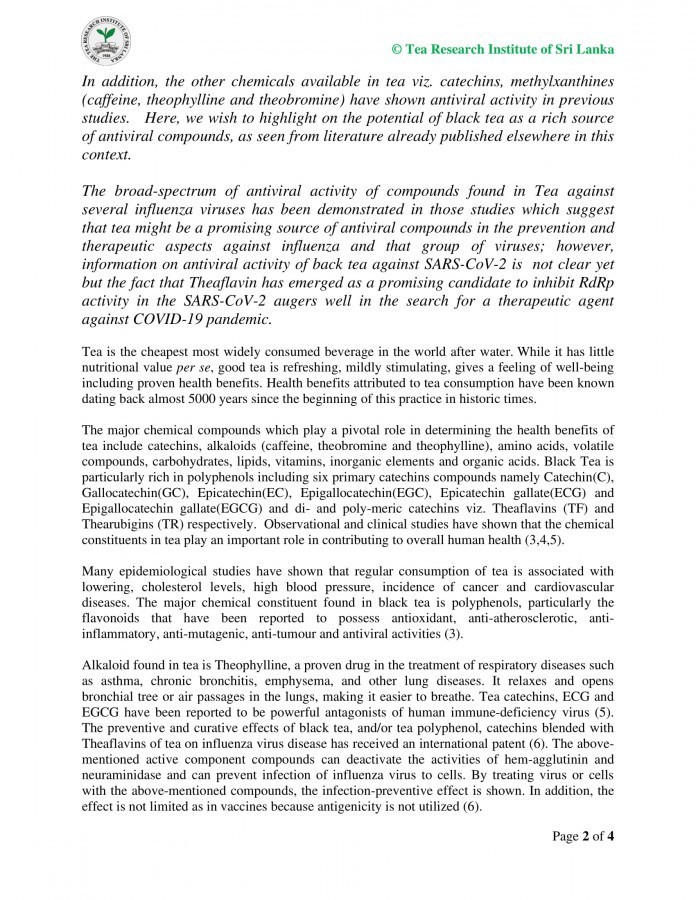 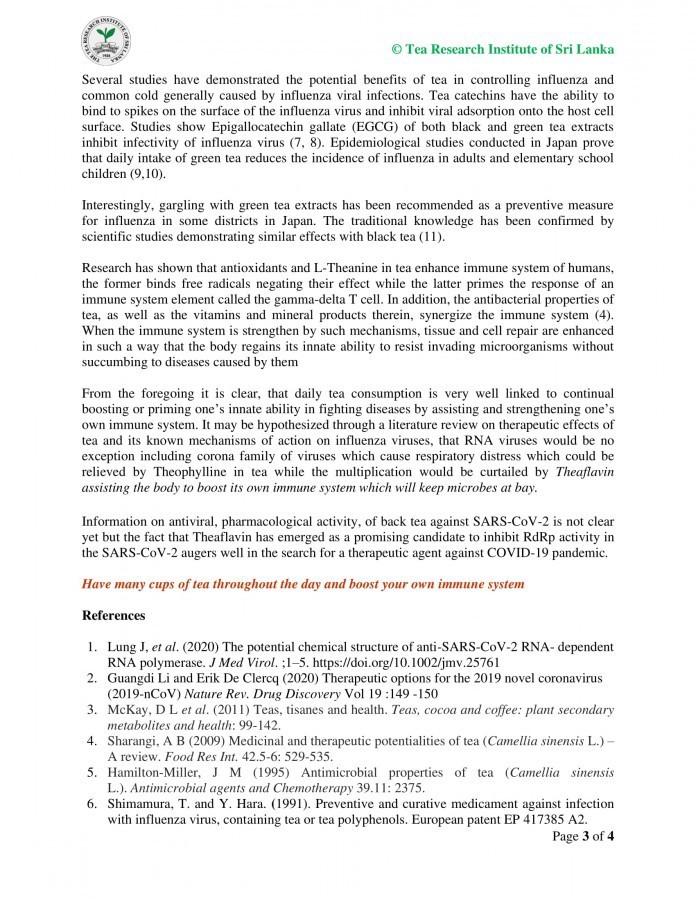 An outbreak of coronavirus disease 2019 (COVID-19) caused by the 2019 novel coronavirus (2019-nCoV the severe acute respiratory syndrome coronavirus 2 (SARS-CoV-2)) (1) has been reported in more than 195 countries across 6 continents as of today.

Various attempts have been made across the globe, in search of therapeutic options exploring antiviral agents, to treat patients affected by COVID-19. In a recent study in Taiwan, antiviral activity of traditional Chinese medicinal compounds were screened for SARS-CoV-2 (2) where they screened chemical structures of 64 compounds through a molecular docking study focusing on an important therapeutic target, namely the RNA- dependent RNA polymerase (RdRp), an important protease that catalyzes the replication of RNA from RNA template. If that can be blocked, by another molecule, SARS-CoV-2 would not multiply in the epithelial cells of the humans was the logic behind the experiment.

Preliminary results suggest that out of the 64 compounds studied, Theaflavin was selected as the prime candidate for developing a SARS-CoV-2 inhibitor targeting RdRp. However, results are yet to be confirmed, in vivo studies before they could be translated into clinical benefits. Theaflavins are antioxidant polyphenols that are formed during enzymatic oxidation process in the manufacture of black tea. In the black tea manufacturing process this is commonly referred to as the "fermentation". It is the black tea which is rich in Theaflavin in contrast to green tea due to the difference in manufacturing process.

In addition, the other chemicals available in tea viz. catechins, methylxanthines (caffeine, theophylline and theobromine) have shown antiviral activity in previous studies. Here, we wish to highlight on the potential of black tea as a rich source of antiviral compounds, as seen from literature already published elsewhere in this context.

The broad-spectrum of antiviral activity of compounds found in Tea against several influenza viruses has been demonstrated in those studies which suggest that tea might be a promising source of antiviral compounds in the prevention and therapeutic aspects against influenza and that group of viruses; however, information on antiviral activity of back tea against SARS-CoV-2 is not clear yet but the fact that Theaflavin has emerged as a promising candidate to inhibit RdRp activity in the SARS-CoV-2 augers well in the search for a therapeutic agent against COVID-19 pandemic.

Tea is the cheapest most widely consumed beverage in the world after water. While it has little nutritional value per se, good tea is refreshing, mildly stimulating, gives a feeling of well-being including proven health benefits. Health benefits attributed to tea consumption have been known dating back almost 5000 years since the beginning of this practice in historic times.

Many epidemiological studies have shown that regular consumption of tea is associated with lowering, cholesterol levels, high blood pressure, incidence of cancer and cardiovascular diseases. The major chemical constituent found in black tea is polyphenols, particularly the flavonoids that have been reported to possess antioxidant, anti-atherosclerotic, anti-inflammatory, anti-mutagenic, anti-tumor and antiviral activities (3).

Alkaloid found in tea is Theophylline, a proven drug in the treatment of respiratory diseases such as asthma, chronic bronchitis, emphysema, and other lung diseases. It relaxes and opens bronchial tree or air passages in the lungs, making it easier to breathe. Tea catechins, ECG and EGCG have been reported to be powerful antagonists of human immune-deficiency virus (5). The preventive and curative effects of black tea, and / or tea polyphenol, catechins blended with Theaflavins of tea on influenza virus disease has received an international patent (6). The above- mentioned active component compounds can deactivate the activities of hem-agglutinin and neuraminidase and can prevent infection of influenza virus to cells. By treating virus or cells with the above-mentioned compounds, the infection-preventive effect is shown. In addition,

Several studies have demonstrated the potential benefits of tea in controlling influenza and common cold generally caused by influenza viral infections. Tea catechins have the ability to bind to spikes on the surface of the influenza virus and inhibit viral adsorption onto the host cell surface. Studies show Epigallocatechin gallate (EGCG) of both black and green tea extracts inhibit infectivity of influenza virus (7, 8). Epidemiological studies conducted in Japan prove that daily intake of green tea reduces the incidence of influenza in adults and elementary school children (9,10).

Interestingly, gargling with green tea extracts has been recommended as a preventive measure for influenza in some districts in Japan. The traditional knowledge has been confirmed by scientific studies demonstrating similar effects with black tea (11).

Research has shown that antioxidants and L-Theanine in tea enhance immune system of humans, the former binds free radicals negating their effect while the latter primes the response of an immune system element called the gamma-delta T cell. In addition, the antibacterial properties of tea, as well as the vitamins and mineral products therein, synergize the immune system (4). When the immune system is strengthen by such mechanisms, tissue and cell repair are enhanced in such a way that the body regains its innate ability to resist invading microorganisms without succumbing to diseases caused by them

From the foregoing it is clear, that daily tea consumption is very well linked to continual boosting or priming one`s innate ability in fighting diseases by assisting and strengthening one`s own immune system. It may be hypothesized through a literature review on therapeutic effects of tea and its known mechanisms of action on influenza viruses, that RNA viruses would be no exception including corona family of viruses which cause respiratory distress which could be relieved by Theophylline in tea while the multiplication would be curtailed by Theaflavin assisting the body to boost its own immune system which will keep microbes at bay.

Information on antiviral, pharmacological activity, of back tea against SARS-CoV-2 is not clear yet but the fact that Theaflavin has emerged as a promising candidate to inhibit RdRp activity in the SARS-CoV-2 augers well in the search for a therapeutic agent against COVID-19 pandemic.

Have many a cup of tea throughout the day and boost your own immune system!

Authors wish to acknowledge the contributions made by Dr MWN Dharmawardene, Chairman, Tea Research Board for editing the manuscript critically, incorporating technical points where necessary and improving the flow of reading.