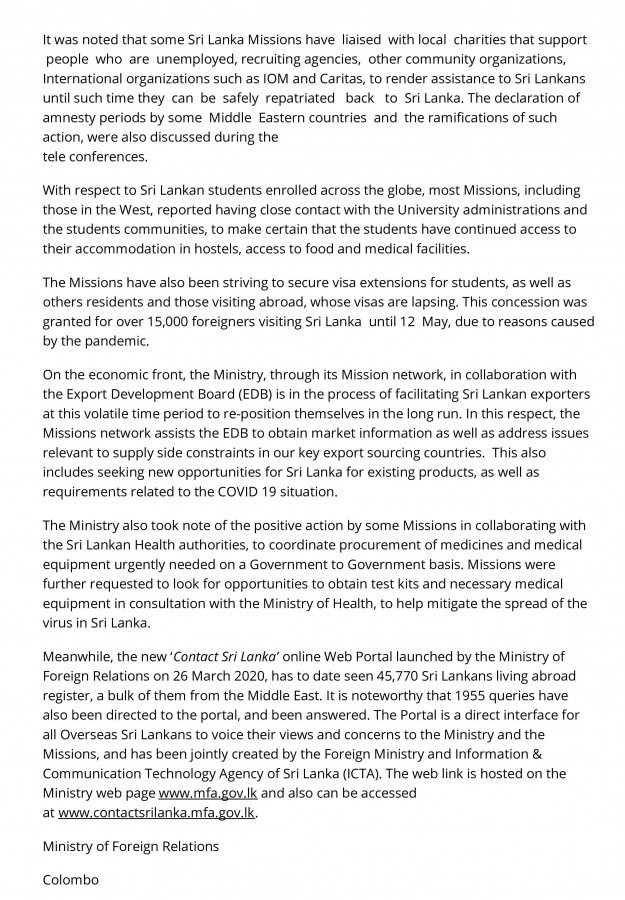 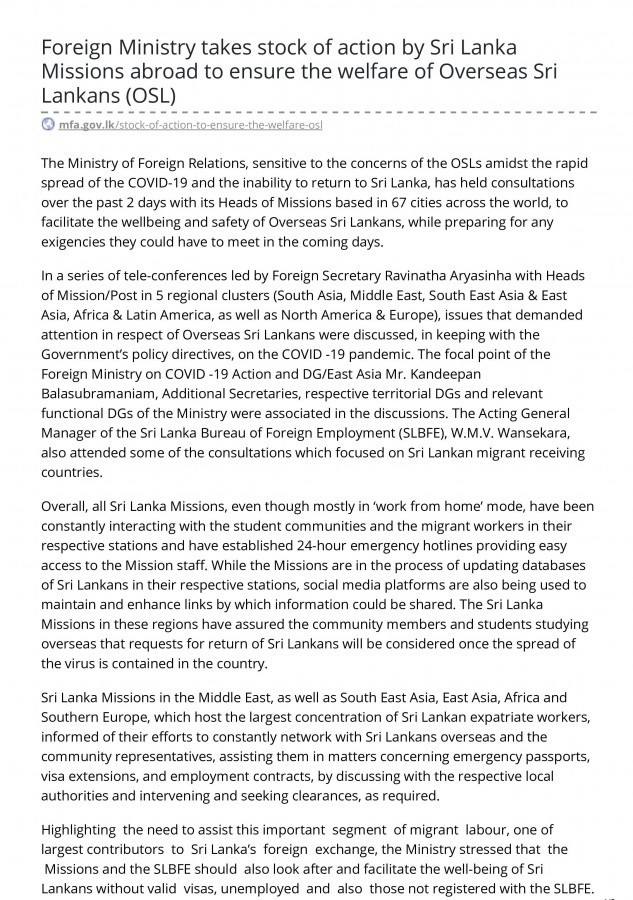 The Ministry of Foreign Relations, sensitive to the concerns of the OSLs amidst the rapid spread of the COVID-19 and the inability to return to Sri Lanka, has held consultations over the past 2 days with its Heads of Missions based in 67 cities across the world, to facilitate the wellbeing and safety of Overseas Sri Lankans, while preparing for any exigencies they could have to meet in the coming days.

In a series of tele-conferences led by Foreign Secretary Ravinatha Aryasinha with Heads of Mission / Post in 5 regional clusters (South Asia, Middle East, South East Asia & East Asia, Africa & Latin America, as well as North America & Europe) , issues that demanded attention in respect of Overseas Sri Lankans were discussed, in keeping with the Government’s policy directives, on the COVID -19 pandemic. The focal point of the Foreign Ministry on COVID -19 Action and DG / East Asia Mr. Kandeepan Balasubramaniam, Additional Secretaries, respective territorial DGs and relevant functional DGs of the Ministry were associated in the discussions. The Acting General Manager of the Sri Lanka Bureau of Foreign Employment (SLBFE), WMV Wansekara, also attended some of the consultations which focused on Sri Lankan migrant receiving countries.

Overall, all Sri Lanka Missions, even though mostly in ‘work from home’ mode, have been constantly interacting with the student communities and the migrant workers in their respective stations and have established 24-hour emergency hotlines providing easy access to the Mission staff. While the Missions are in the process of updating databases of Sri Lankans in their respective stations, social media platforms are also being used to maintain and enhance links by which information could be shared. The Sri Lanka Missions in these regions have assured the community members and students studying overseas that requests for return of Sri Lankans will be considered once the spread of the virus is contained in the country.

Sri Lanka Missions in the Middle East, as well as South East Asia, East Asia, Africa and Southern Europe, which host the largest concentration of Sri Lankan expatriate workers, informed of their efforts to constantly network with Sri Lankans overseas and the community representatives, assisting them in matters concerning emergency passports, visa extensions, and employment contracts, by discussing with the respective local authorities and intervening and seeking clearances, as required.

Highlighting  the need to assist this important  segment  of migrant  labour, one of largest contributors  to  Sri Lanka’s  foreign  exchange, the Ministry stressed that  the  Missions and the SLBFE should  also look after and facilitate the well-being of Sri Lankans without valid  visas, unemployed  and  also  those not registered with the SLBFE. It was noted that some Sri Lanka Missions have  liaised  with local  charities that support  people  who  are  unemployed, recruiting agencies,  other community organizations, International organizations such as IOM and Caritas, to render assistance to Sri Lankans until such time they  can  be  safely  repatriated   back   to  Sri Lanka. The declaration of amnesty periods by some  Middle  Eastern countries  and  the ramifications of such action, were also discussed during the
tele conferences.

With respect to Sri Lankan students enrolled across the globe, most Missions, including those in the West, reported having close contact with the University administrations and the students communities, to make certain that the students have continued access to their accommodation in hostels, access to food and medical facilities.

The Missions have also been striving to secure visa extensions for students, as well as others residents and those visiting abroad, whose visas are lapsing. This concession was granted for over 15,000 foreigners visiting Sri Lanka  until 12  May, due to reasons caused by the pandemic.

On the economic front, the Ministry, through its Mission network, in collaboration with the Export Development Board (EDB) is in the process of facilitating Sri Lankan exporters at this volatile time period to re-position themselves in the long run. In this respect, the Missions network assists the EDB to obtain market information as well as address issues relevant to supply side constraints in our key export sourcing countries.  This also includes seeking new opportunities for Sri Lanka for existing products, as well as requirements related to the COVID 19 situation.

The Ministry also took note of the positive action by some Missions in collaborating with the Sri Lankan Health authorities, to coordinate procurement of medicines and medical equipment urgently needed on a Government to Government basis. Missions were further requested to look for opportunities to obtain test kits and necessary medical equipment in consultation with the Ministry of Health, to help mitigate the spread of the virus in Sri Lanka.

Meanwhile, the new ’ Contact Sri Lanka’  online Web Portal launched by the Ministry of Foreign Relations on 26 March 2020, has to date seen 45,770 Sri Lankans living abroad register, a bulk of them from the Middle East. It is noteworthy that 1955 queries have also been directed to the portal, and been answered. The Portal is a direct interface for all Overseas Sri Lankans to voice their views and concerns to the Ministry and the Missions, and has been jointly created by the Foreign Ministry and Information & Communication Technology Agency of Sri Lanka (ICTA). The web link is hosted on the Ministry web page  www.mfa.gov.lk  and also can be accessed at  www.contactsrilanka.mfa.gov.lk .