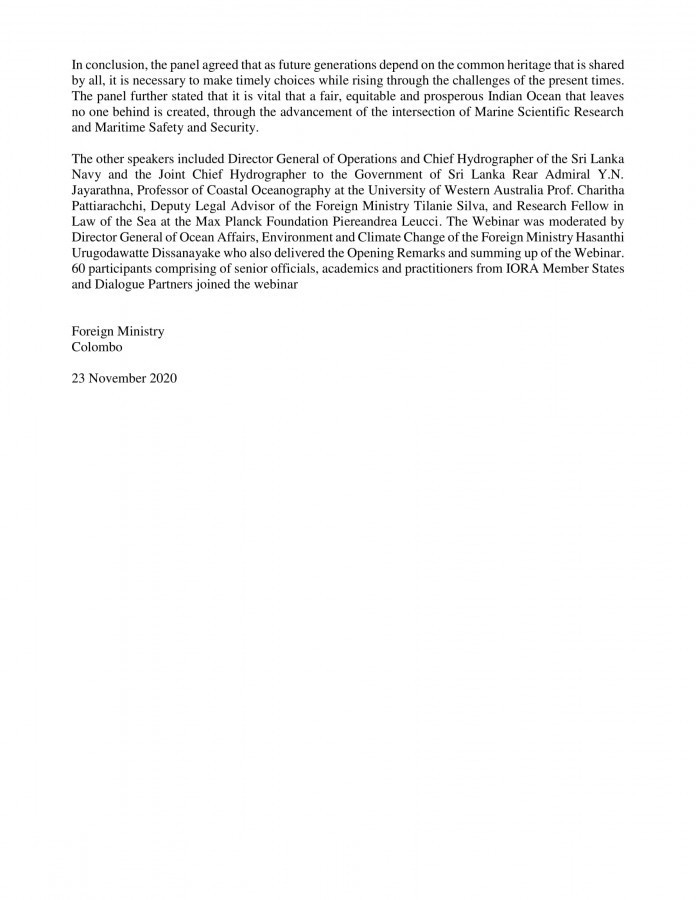 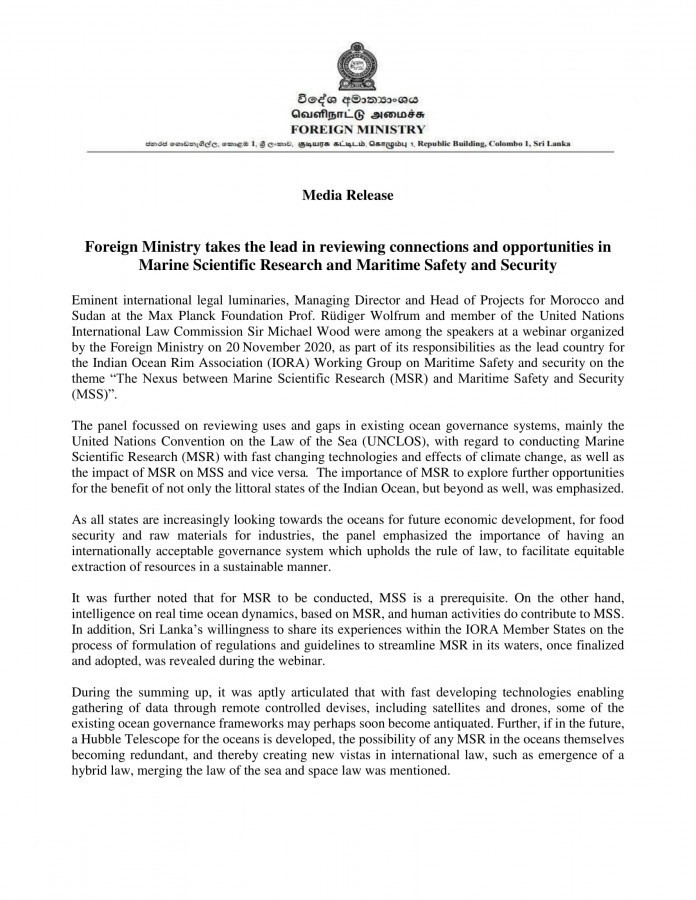 Eminent international legal luminaries, Managing Director and Head of Projects for Morocco and Sudan at the Max Planck Foundation Prof. Rüdiger Wolfrum and member of the United Nations International Law Commission Sir Michael Wood were among the speakers at a webinar organized by the Foreign Ministry on 20  November 2020, as part of its responsibilities as the lead country for the Indian Ocean Rim Association (IORA) Working Group on Maritime Safety and security on the theme “The Nexus between Marine Scientific Research (MSR) and Maritime Safety and Security (MSS)”.

The panel focussed on reviewing uses and gaps in existing ocean governance systems, mainly the United Nations Convention on the Law of the Sea (UNCLOS), with regard to conducting Marine Scientific Research (MSR) with fast changing technologies and effects of climate change, as well as the impact of MSR on MSS and vice versa .   The importance of MSR to explore further opportunities for the benefit of not only the littoral states of the Indian Ocean, but beyond as well, was emphasized.

As all states are increasingly looking towards the oceans for future economic development, for food security and raw materials for industries, the panel emphasized the importance of having an internationally acceptable governance system which upholds the rule of law, to facilitate equitable extraction of resources in a sustainable manner.

It was further noted that for MSR to be conducted, MSS is a prerequisite. On the other hand, intelligence on real time ocean dynamics, based on MSR, and human activities do contribute to MSS. In addition, Sri Lanka’s willingness to share its experiences within the IORA Member States on the process of formulation of regulations and guidelines to streamline MSR in its waters, once finalized and adopted, was revealed during the webinar.

During the summing up, it was aptly articulated that with fast developing technologies enabling gathering of data through remote controlled devises, including satellites and drones, some of the existing ocean governance frameworks may perhaps soon become antiquated. Further, if in the future, a Hubble Telescope for the oceans is developed, the possibility of any MSR in the oceans themselves becoming redundant, and thereby creating new vistas in international law, such as emergence of a hybrid law, merging the law of the sea and space law was mentioned.

In conclusion, the panel agreed that as future generations depend on the common heritage that is shared by all, it is necessary to make timely choices while rising through the challenges of the present times. The panel further stated that it is vital that a fair, equitable and prosperous Indian Ocean that leaves no one behind is created, through the advancement of the intersection of Marine Scientific Research and Maritime Safety and Security.

The other speakers included Director General of Operations and Chief Hydrographer of the Sri Lanka Navy and the Joint Chief Hydrographer to the Government of Sri Lanka Rear Admiral YN Jayarathna, Professor of Coastal Oceanography at the University of Western Australia Prof. Charitha Pattiarachchi, Deputy Legal Advisor of the Foreign Ministry Tilanie Silva, and Research Fellow in Law of the Sea at the Max Planck Foundation Piereandrea Leucci. The Webinar was moderated by Director General of Ocean Affairs, Environment and Climate Change of the Foreign Ministry Hasanthi Urugodawatte Dissanayake who also delivered the Opening Remarks and summing up of the Webinar. 60 participants comprising of senior officials, academics and practitioners from IORA Member States and Dialogue Partners joined the webinar