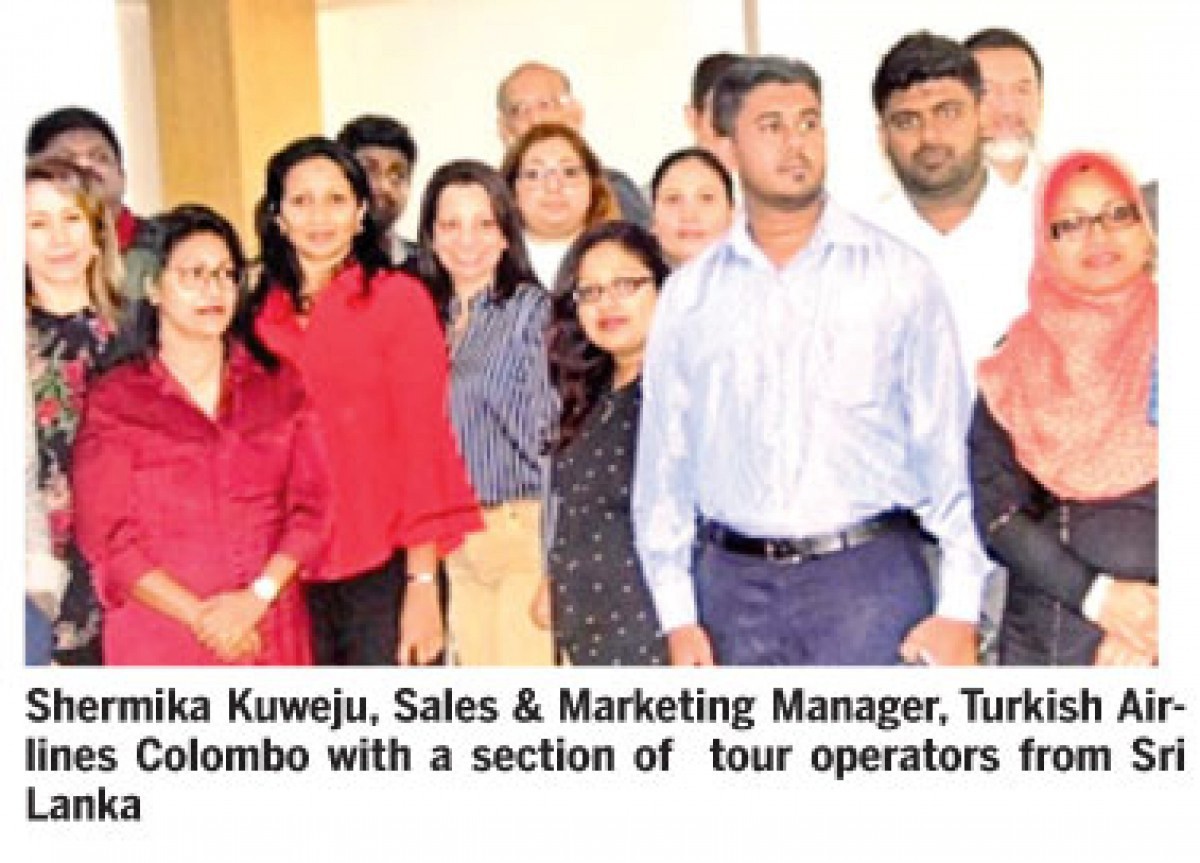 Welcoming the tour operators and travel partners, Tuncay Eminoglu, Turkish Airlines Vice-President, Sales for Asia, Far East Regions and Australia, said Turkish Airlines flies to more counties than any other airline in the world and Sri Lanka was one of them where the first flight was launched in 2013. He said at that time they had only 4 weekday flights to Colombo and after considering the demand and success, the frequency had now increased to daily flights with modern A330 Airbus aircraft.

Turkish Airlines which started its journey in 1933 with only five aircraft today has 326 aircraft with one of the youngest fleets in the world and they were proud to reach their destination number 302 which include 253 international and 49 domestic and covering a record number of 129 countries, Eminoglu said.

Sri Lanka Ambassador to Turkey P M Amza addressing the meeting said the topic of the gathering of the day which was Colombo Meets Istanbul was broader one in his view because it did not talk about one segment of the people like the Colombo government meeting the Turkish government nor it talked about Colombo institutes meeting Turkish institutes.

The Lankan Ambassador to Turkey said the awareness between the two countries must be increased and one problem that he had noticed was that all propaganda material about Sri Lanka was available only in English. This promotional material should be available in the Turkish language, he said.

The ambassador said to overcome and address that situation with the assistance of a honorary consul he had compiled a booklet in the Turkish language highlighting the places that Turkish tourists would prefer to visit in Sri Lanka. While emphasizing that the daily Turkish airlines flights to Sri Lanka should be used to further promote tourism between the two countries ambassador Amza urged Sri Lankan travel agents to use the opportunity fulfill that objective.

In 1864 the Ottoman Empire established their first consular relations between the two countries. The reason why the Ottoman’s opened an honorary Consulate in Galle was to help the traders and also assist the pilgrims.

He also recalled that Turkey was one of the first countries that recognized Sri Lanka after its independence and the Turkish residential embassy in Sri Lanka was opened in 2012 and in Turkey in 2013 with Turkish Airlines direct flights from Istanbul to Colombo also commencing the same year. “The direct flight of Turkish Airlines is a great impetus for our close relations,” he said.

Recalling that Sri Lanka in Arabic is called Sarandip which means pleasant surprise, the Turkish Ambassador said he has been in Sri Lanka during the past two and a half years and the country is full of present suprises. “That’s why I highly recommend my fellow Turkish Travel Agents representing the workshop to promote Sri Lanka. On the other hand I request my Sri Lankan friends to promote Turkey,” Özcuhadar urged.

Several Sri Lankan travel agents were awarded at the event which concluded with Biz to Biz meetings between the Sri Lankan and Turkish counterparts.