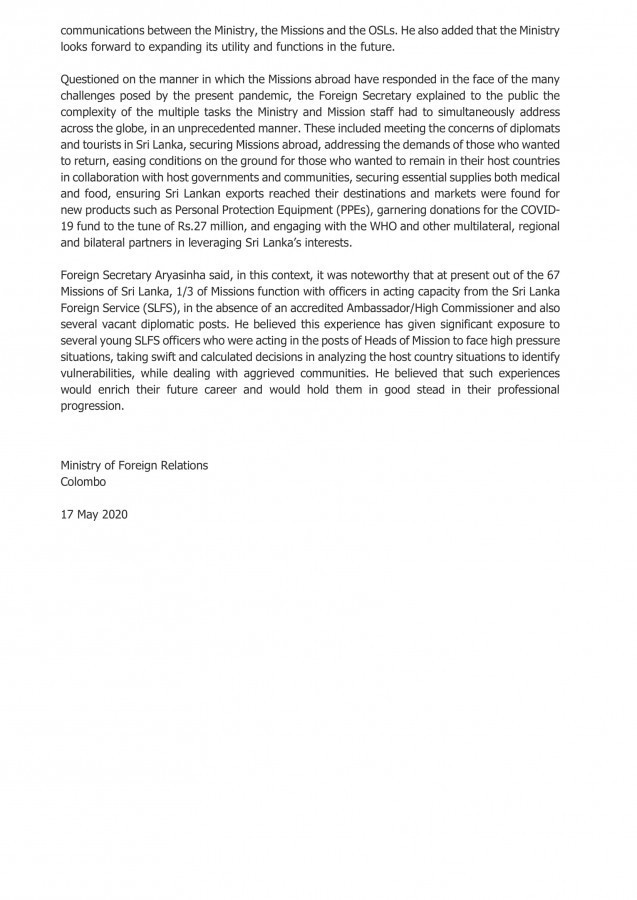 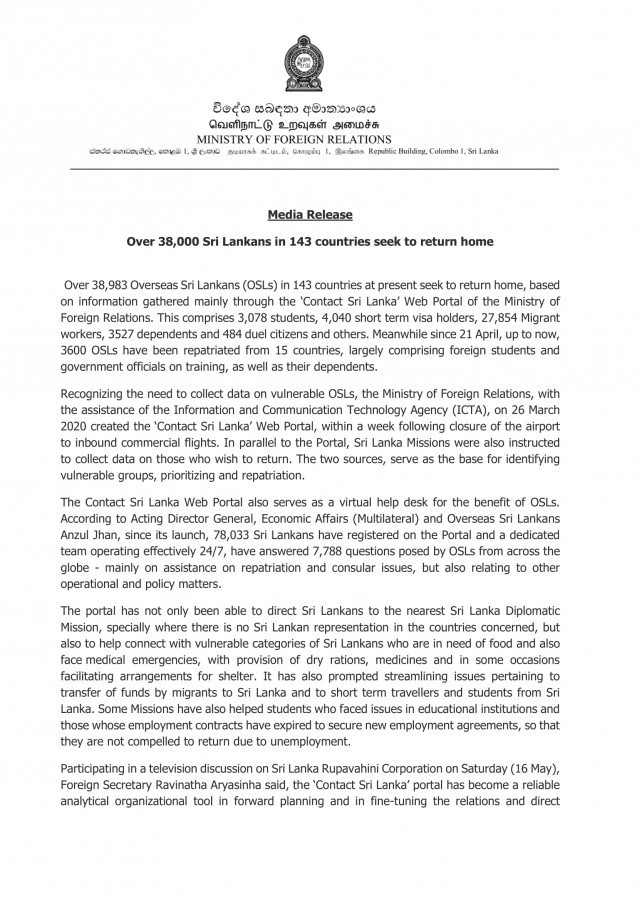 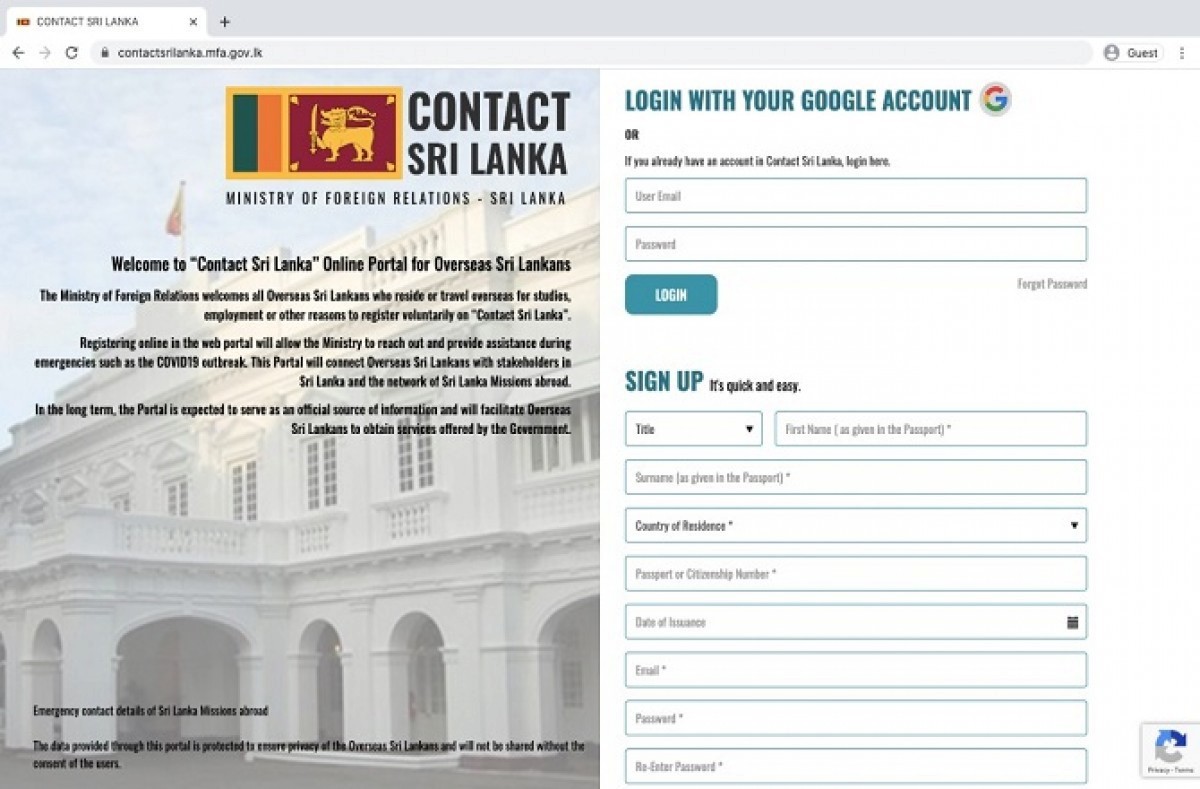 Over 38,983 Overseas Sri Lankans (OSLs) in 143 countries at present seek to return home, based on information gathered mainly through the ‘Contact Sri Lanka’ Web Portal of the Ministry of Foreign Relations. This comprises 3,078 students, 4,040 short term visa holders, 27,854 Migrant workers, 3527 dependents and 484 duel citizens and others. Meanwhile since 21 April, up to now, 3600 OSLs have been repatriated from 15 countries, largely comprising foreign students and government officials on training, as well as their dependents.

Recognizing the need to collect data on vulnerable OSLs, the Ministry of Foreign Relations, with the assistance of the Information and Communication Technology Agency (ICTA), on 26 March 2020 created the ‘Contact Sri Lanka’ Web Portal, within a week following closure of the airport to inbound commercial flights. In parallel to the Portal, Sri Lanka Missions were also instructed to collect data on those who wish to return. The two sources, serve as the base for identifying vulnerable groups, prioritizing and repatriation.

The Contact Sri Lanka Web Portal also serves as a virtual help desk for the benefit of OSLs. According to Acting Director General, Economic Affairs (Multilateral) and Overseas Sri Lankans Anzul Jhan, since its launch, 78,033 Sri Lankans have registered on the Portal and a dedicated team operating effectively 24/7, have answered 7,788 questions posed by OSLs from across the globe - mainly on assistance on repatriation and consular issues, but also relating to other operational and policy matters.

The portal has not only been able to direct Sri Lankans to the nearest Sri Lanka Diplomatic Mission, specially where there is no Sri Lankan representation in the countries concerned, but also to help connect with vulnerable categories of Sri Lankans who are in need of food and also face medical emergencies, with provision of dry rations, medicines and in some occasions facilitating arrangements for shelter. It has also prompted streamlining issues pertaining to transfer of funds by migrants to Sri Lanka and to short term travellers and students from Sri Lanka. Some Missions have also helped students who faced issues in educational institutions and those whose employment contracts have expired to secure new employment agreements, so that they are not compelled to return due to unemployment.

Participating in a television discussion on Sri Lanka Rupavahini Corporation on Saturday (16 May), Foreign Secretary Ravinatha Aryasinha said, the ‘Contact Sri Lanka’ portal has become a reliable analytical organizational tool in forward planning and in fine-tuning the relations and direct communications between the Ministry, the Missions and the OSLs. He also added that the Ministry looks forward to expanding its utility and functions in the future.

Questioned on the manner in which the Missions abroad have responded in the face of the many challenges posed by the present pandemic, the Foreign Secretary explained to the public the complexity of the multiple tasks the Ministry and Mission staff had to simultaneously address across the globe, in an unprecedented manner. These included meeting the concerns of diplomats and tourists in Sri Lanka, securing Missions abroad, addressing the demands of those who wanted to return, easing conditions on the ground for those who wanted to remain in their host countries in collaboration with host governments and communities, securing essential supplies both medical and food, ensuring Sri Lankan exports reached their destinations and markets were found for new products such as Personal Protection Equipment (PPEs), garnering donations for the COVID-19 fund to the tune of Rs.27 million, and engaging with the WHO and other multilateral, regional and bilateral partners in leveraging Sri Lanka’s interests.

Foreign Secretary Aryasinha said, in this context, it was noteworthy that at present out of the 67 Missions of Sri Lanka, 1/3 of Missions function with officers in acting capacity from the Sri Lanka Foreign Service (SLFS), in the absence of an accredited Ambassador/High Commissioner and also several vacant diplomatic posts. He believed this experience has given significant exposure to several young SLFS officers who were acting in the posts of Heads of Mission to face high pressure situations, taking swift and calculated decisions in analyzing the host country situations to identify vulnerabilities, while dealing with aggrieved communities. He believed that such experiences would enrich their future career and would hold them in good stead in their professional progression.