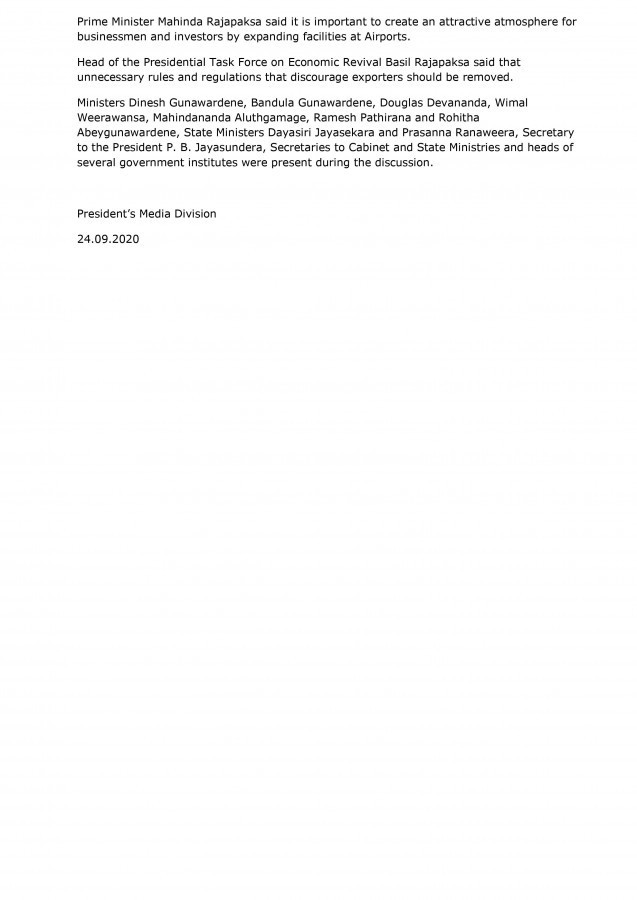 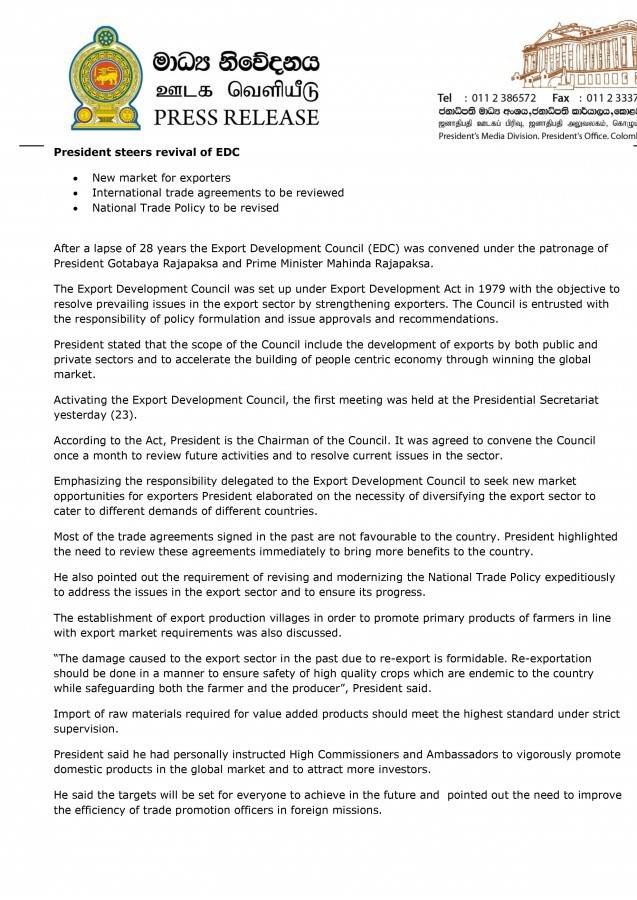 After a lapse of 28 years the Export Development Council (EDC) was convened under the patronage of President Gotabaya Rajapaksa and Prime Minister Mahinda Rajapaksa.

The Export Development Council was set up under Export Development Act in 1979 with the objective to resolve prevailing issues in the export sector by strengthening exporters. The Council is entrusted with the responsibility of policy formulation and issue approvals and recommendations.

President stated that the scope of the Council include the development of exports by both public and private sectors and to accelerate the building of people centric economy through winning the global market.

Activating the Export Development Council, the first meeting was held at the Presidential Secretariat yesterday (23).

According to the Act, President is the Chairman of the Council. It was agreed to convene the Council once a month to review future activities and to resolve current issues in the sector.

Emphasizing the responsibility delegated to the Export Development Council to seek new market opportunities for exporters President elaborated on the necessity of diversifying the export sector to cater to different demands of different countries.

He also pointed out the requirement of revising and modernizing the National Trade Policy expeditiously to address the issues in the export sector and to ensure its progress.

The establishment of export production villages in order to promote primary products of farmers in line with export market requirements was also discussed.

“The damage caused to the export sector in the past due to re-export is formidable. Re-exportation should be done in a manner to ensure safety of high quality crops which are endemic to the country while safeguarding both the farmer and the producer”, President said.

President said he had personally instructed High Commissioners and Ambassadors to vigorously promote domestic products in the global market and to attract more investors.

He said the targets will be set for everyone to achieve in the future and  pointed out the need to improve the efficiency of trade promotion officers in foreign missions.

Prime Minister Mahinda Rajapaksa said it is important to create an attractive atmosphere for businessmen and investors by expanding facilities at Airports.

Head of the Presidential Task Force on Economic Revival Basil Rajapaksa said that unnecessary rules and regulations that discourage exporters should be removed.