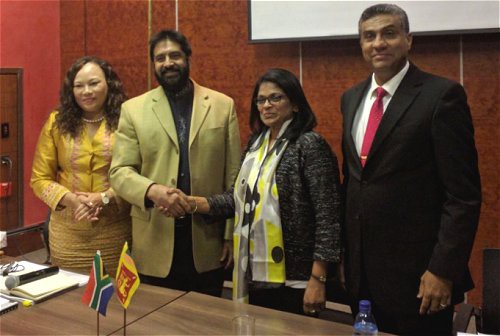 The Sixth Session of the Senior Officials’ Meeting of the Partnership Forum between Sri Lanka - South Africa was held in Pretoria, South Africa on 07th April 2017, Foreign Affairs Ministry said.

At the forum the Senior Officials reviewed the progress made in the identified areas of cooperation and deliberated on further expanding the existing cooperation to cover the subjects of education, development of skills, science and technology, technology transfer, blue economy, transport and connectivity, police services, wildlife, water and agriculture.

The Partnership Forum between Sri Lanka and South Africa was established in 2003 with an objective to advance and strengthen close cooperation between the two countries in the political, trade, economic, culture, scientific and technological fields.

The Forum decided to meet in Colombo in November 2017 to review and advance implementation of decisions made in all areas for the mutual benefit of both countries.

The Forum was co-chaired by Mrs. Grace Asirwatham, Additional Secretary of the Ministry of Foreign Affairs of Sri Lanka and Ambassador Anil Sooklal, Deputy Director General, Asia and Middle East of the Department of International Relations and Cooperation of South Africa.